Posted by BCM on Tuesday, March 29, 2016 Under: Baking
Named after Queen Victoria, who apparently had a very sweet tooth, what do the words “Victoria Sponge Cake” conjure up for you?
Fond memories perhaps of teatime at home with Mum or Granny, the warm smell of fresh baking still in the air? They probably all had their own version of this simple two layered cake filled with jam and cream, topped with a dusting of caster sugar. But what a special treat it was, and still is. 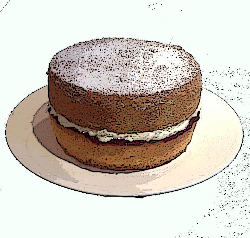 Teatime itself has its roots in Victorian times when it was usual to eat only breakfast and dinner. The Duchess of Bedfordshire, a lady in waiting to Queen Victoria herself, apparently struggled to stay the course. She took to taking tea and a light snack at around 4pm to keep her going. She invited friends and the practice soon caught on in drawing rooms across the land.
Adults tended to eat fruit and seed cakes but the children up in the nursery were offered a simple sponge that they were less likely to choke on. As worried mothers realized what they were missing, the sponge cake gradually made its way to the adult table and became the must-have delight we know today.
Four ingredients make up a typical Victoria Sponge Cake: flour, eggs, sugar and butter. In these days of convenience foods, ready-made versions are easily found in the shops. But really, have you looked to see what goes in to a shop bought one? Cheap commodity oils instead of butter. Dried egg powders instead of fresh eggs. No end of emulsifiers and other processing aids.
They could not be simpler to make yourself but if you are too busy then the Balham Country Market’s own Victoria Sponge Cake is waiting for you. Baked at home by our own producers using the freshest of ingredients they are ready to eat and savor straight away.
That’s what you call a real treat. Come along to the next market and see for yourself. You won’t regret it..

Tags: cakes
« Back to posts