Posted by BCM on Wednesday, April 20, 2016 Under: Baking
Scones are amazing!
So simple to make and so versatile.
To a basic dough mixture, prepared in minutes, you can add raisins or currants to make them sweet. You can add ingredients like cheese to make them savoury.
Light in texture, you can also eat them plain.  Who hasn’t drooled over a cream tea in Devon where they come slathered with clotted cream and strawberry jam?  That’s nothing less than food for the gods.
The list of variations is endless, as a glance through any good cookbook will show you.  And you can eat them at any time of the day, breakfast, teatime, or maybe both.  You really don’t need any excuse. 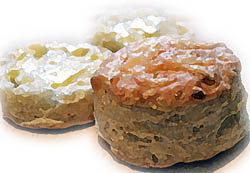 We all know what scones are then.
But do we know where they come from?
Passed down through the generations, they’ve been around for centuries. Long before baking powder came along, unleavened oats were baked on a griddle in plate-sized flat rounds. Known as a bannock in Scotland, when cut into triangles for serving, each wedge was called a scone. There’s a Scottish Gaelic word “sgonn” meaning a lump. There is also a town in Scotland called Scone famous for the Stone of Scone or the Stone of Destiny where the Kings of Scotland were crowned.
Hang on a minute though. The Dutch made something called “Schoonbrot” meaning fine bread, which sounds a bit similar. The Irish have their own versions as in Irish soda bread. And, over in Wales, you get scrumptious welsh cakes.
Whatever, there’s another perhaps more pressing controversy around the word scone. How do you pronounce it?
The argument, which has tested the strongest of friendships, generally divides along geographic and, dare it be said, class lines. A minefield nicely summed up in this anonymous poem:
‘I asked the maid in dulcet tone
To order me a buttered scone
The silly girl has been and gone
And ordered me a buttered scone.’
Wherever you think scones come from; however you pronounce the word, don’t worry. The BCM producers will know exactly what you mean and will always have some fine examples ready for you to take home and enjoy.
Don’t miss the next market.