May All Your Christmases Be White

Posted by BCM on Thursday, November 24, 2016 Under: Seasons
Are you dreaming of a White Christmas?
Just like the ones you used to know?
Let's face it, the odds on this happening in London are pretty bad. But that won't stop people who enjoy a flutter taking a punt on it.
All it takes, according to the Met Office, is one single snowflake to fall during the 24 hours of Christmas Day.
The last time a “bookies'” event was triggered in London was 1999 when, literally, a few wet flakes fell from the sky. Very disappointing.
There's something about a white Christmas that captures our imaginations.
Maybe bitterly cold temperatures and thick snow on the ground intensify the warmth we feel indoors before an open fire, partaking of seasonal food and drink with the family, playing the odd game or two.
Charles Dickens caught this mood perfectly in his famous novella A Christmas Carol, published in 1843. He is often referred to as the man who invented Christmas. Many of the secular rituals we mark the religious festival with today are down to him.
The Victorians loved ghost stories. In this one, set in a cold and snowy London at Christmas, Dickens tells of a mean-spirited moneylender, Ebenezer Scrooge, who changes his penny-pinching ways.
After a series of ghostly encounters, he learns to value the people around him, look after the family and be generous to those less fortunate.
The story will warm the cockles of your heart. It is easy to see how it led to Christmas becoming the season of holiday cheer and goodwill.
Many foods we associate with Christmas date from this time.
Roast turkey became an alternative to goose for the wealthier members of society. It was also the perfect size for larger family gatherings.
Christmas pudding is still the traditional dish to round off Christmas dinner. This rich mixture of dried fruits bound by egg and suet, infused with cinnamon, nutmeg and other spices, is often made months beforehand.
Adding generous glugs of brandy or rum preserves it and, importantly, helps it light when brought to the table in blazing glory.
Crackers, sending Christmas cards and exchanging gifts also date from this period. 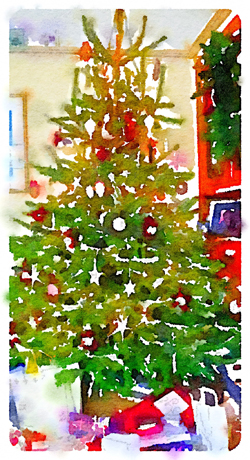 Last but not least, the German tradition of decorating a tree in the house was popularised by Queen Victoria's consort Prince Albert.
When the Illustrated London News published a drawing of the Royal family gathered around the tree at Windsor Castle in 1884, everyone wanted one.
The run-up to Christmas is a busy time and for Country Market producers it's especially so.
As they prepare their full range of traditional goodies from Christmas cakes and puddings to mince pies and handcrafted gifts, they may even be singing along with Bing Crosby.
And it's a sure bet they'll be well and truly into the Christmas spirit by the time they get to those enduring closing lines:
May your days be merry and bright
And may all your Christmases be white

Tags: "white christmas"
« Back to posts