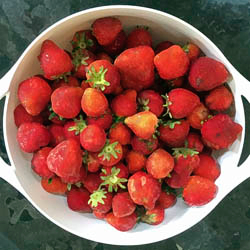 At this time of year, thoughts turn naturally to strawberries.
For starters, we’ve just had the “strawberry” moon. This quaint name for June’s full moon was coined by the Algonquin tribe of North America and signaled the start of strawberry picking. They gave every full moon of the year a different name to help keep track of the seasons and would have found the last one we had on 20th June particularly auspicious because it coincided with the summer solstice. That’s rare and won’t happen again until 2062.
The Wimbledon Tennis Championships are also on. Spectators at the All England Club will polish off 28,000 kgs of them during the fortnight. Almost certainly, they’ll be topped with cream. Very likely, they’ll be washed down with a glass of chilled champagne or Pimms.
Strawberries are now at their best. Punnets of plump juicy fruits are piled high to the sky in markets and shops. And if you’re lucky, they’ll be going for a song.
Interestingly, strawberries are not true berries. If they were, they’d have their seeds on the inside. In fact, they are the only fruit that carry their seeds on the outside. And lots of them there are too – around 200 per fruit. Watch they don’t stick in your teeth!
They don’t generally grow from their seeds either. Established plants send out runners that can take root to form new ones quite a distance from the mother plant. They’re perennial but for best results serious gardeners will replace old ones after three or four years.
The deep red colour and heart shape of strawberries assured them a leading role in ancient folklore. To the ancient Greeks, they symbolised Venus, the goddess of love. In Victorian flower language, they stood for perfection and modesty because they hide beneath their leaves. In Christian art, the trifoliate leaves represent the Holy Trinity, which is why, in medieval times, stonemasons carved them into altars and other church adornments.
Belgians think so much of strawberries that they have dedicated a museum to them in the town of Wépion, along the banks of the River Meuse. In the gift shop at Le Musée de la Fraise (The Strawberry Museum), you can buy everything from strawberry jam to strawberry beer.
Which reminds us that, in culinary terms, strawberries are veritable superfoods, bursting with goodness. They make excellent jams to dollop on scones. They make eye-catching toppings for sponge cakes, pavlovas and trifles. Use them to flavour ice cream, fools, jelly and even vinegar. Eat them raw in salads or add them as a garnish to summer cocktails.
Be warned though that ripe strawberries, once picked, don’t hang around for long. So there’s no need to feel guilty gorging on them. Make the most of them, the sunshine and the summer, while you can.

Tags: strawberries
« Back to posts