Whether you measure the start like the weathermen from 1st September or astrologically from the autumn equinox, which fell on the 22nd September this year, there’s no denying it.  The nights are drawing in.  The air is cooler.  And damper.  As John Keats famously put it, the season of mists and mellow fruitfulness is upon us.

After the wet spring, the summer ended well.  September just kept giving with sensational temperatures.  If this continues the autumn foliage will hold its colour for longer.

That means lovely bracing walks in the countryside kicking through golden leaves under a deep blue sky and the smell of bonfires in the air.  Time it right and you'll be home in the warm by teatime when it will be dark. What luxury then to snuggle up by the fire, sip tea and munch your way through a homemade flapjack or two; or perhaps a chocolate brownie, a slice of Victoria sponge or even lemon drizzle cake.

But don’t get too settled.  In the allotment, it’s time to plant onion sets, broad beans and transplant spring cabbages for next year.  Beds need clearing of old plants for composting and any diseased plants should be burned.  A great excuse for a bonfire. 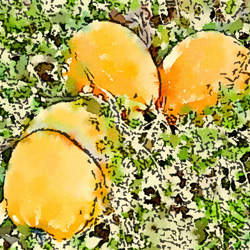 Anyone with pumpkins left over, can always carve them into scary lanterns for that great autumn event on 31st October.

Halloween has grown in popularity here to become the second largest party night after New Year’s Eve.  The business is worth around £450million as the supermarkets fall over themselves to sell you Halloween themed food, fancy dress costumes and, of course, pumpkins.

This blatant commercialisation is a far cry from its roots in the pagan festival of Samhain, which the Celts celebrated on the eve of their New Year on 1st November.

On this night, they believed ghosts of the dead returned to earth to cause trouble.  In mortal fear, people built bonfires to protect themselves and burnt crops and animals as sacrifices.  They dressed in costumes and wore masks to disguise themselves.  The presence of spirits was also thought to favour making predictions especially those of young women and their marriage prospects.

With the rise of Christianity, the tradition became associated with All Saints Day, also called All-hallows, which is celebrated on 1st November, hence All-hallows Eve and Halloween.

In those early days, the pace of life was driven by the seasons.  Autumn was an anxious time of magic and superstition while preparing for the darkness and uncertainty of winter.

Autumn today is still a time to ready ourselves for the winter, that time of enforced idleness when we can take stock of our lives and plan for the year ahead.

And if you’re looking for a delicious homemade cake to cheer you on while thinking about it under a blanket on the sofa, then you know where to find us..