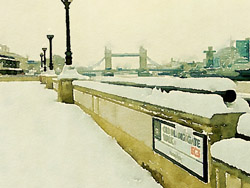 January is generally the coldest month of the year in London.
Coming so soon after Christmas, it can be a bleak and uninspiring time.
But, if you think it gets cold now, it’s nothing to how it once was.  In days gone by, it was quite common for the Thames to freeze over.
The years between 1309 and 1814 were known as the Little Ice Age and the Thames iced over at least 23 times!
The river was wider then and flowed a lot slower.  Blocks of ice would catch in the narrow arches of the Old London Bridge and soon stopped the flow of water.
The ice was so thick in the winter of 1536 that Henry VIII travelled down the river from central London to Greenwich by sleigh.
So many people depended on the river for their livelihood that when it did freeze over it meant hardship. But, rather than mope, Londoners took to the ice in the true spirit of “carry on regardless” and held Frost Fairs in celebration.
Illustrations from the time show enterprising traders setting up tents made of sailcloth and oars from which they sold food and drink. Refusing to be beaten, they roasted hogs over fires and even set up presses to print cards as keepsakes.
It’s tempting to think that our very own Balham Country Market would have joined the fun with a pop-up stall. After all, there’s a piece of gingerbread left over from one of these fairs on display at the London Museum.
Frost Fairs were surreal occasions and often riotous as people overindulged. At the last one in 1814 they must have gawped in disbelief when, reportedly, “a very fine elephant was led across the Thames a little below Blackfriars Bridge”.
Winters are milder now but the Country Market gardeners will always welcome a cold snap.
As long as tender plants are tucked away in a greenhouse or protected by fleece, a good frost helps break down soil ready for the next growing season and kills off pests such as aphids, slugs and snails. A blanket of snow also insulates and protects plants from biting winds.
Some vegetables actually benefit from frost.
Brussels sprouts, cabbage, broccoli, turnips, winter radish and kale will all develop a better flavour during cold weather. Some people swear that kale is at its best when cooked frozen from the ground.
Frost helps starches in parsnips and carrots to turn to sugar giving them that particular sweet flavour.
Our bodies also crave heavier foods and starchy carbohydrates in cold weather to build us up and keep warm.
Carbohydrates stimulate serotonin in the brain, which lifts our mood and makes us feel happier.
It seems, then, that the trick to getting through January is to have fun, keep warm, eat vegetables and consume lots of cake.
And the Balham Country Market is one place we know that ticks all of those boxes!